The Weather Channel had some questions about the cost and benefits of solar. So, EnergySage CEO Vikram Aggarwal and Josh, an actual homeowner who went solar with EnergySage, joined them one Saturday morning to discuss how you can easily research the price and benefits of going solar! Check out a summary of the questions and answers covered in the interviews.


Questions covered in the interview

Want to watch The Weather Channel interview with Vikram Aggarwal? Check out this segment on the costs and benefits of solar and this segment on making the switch to solar. 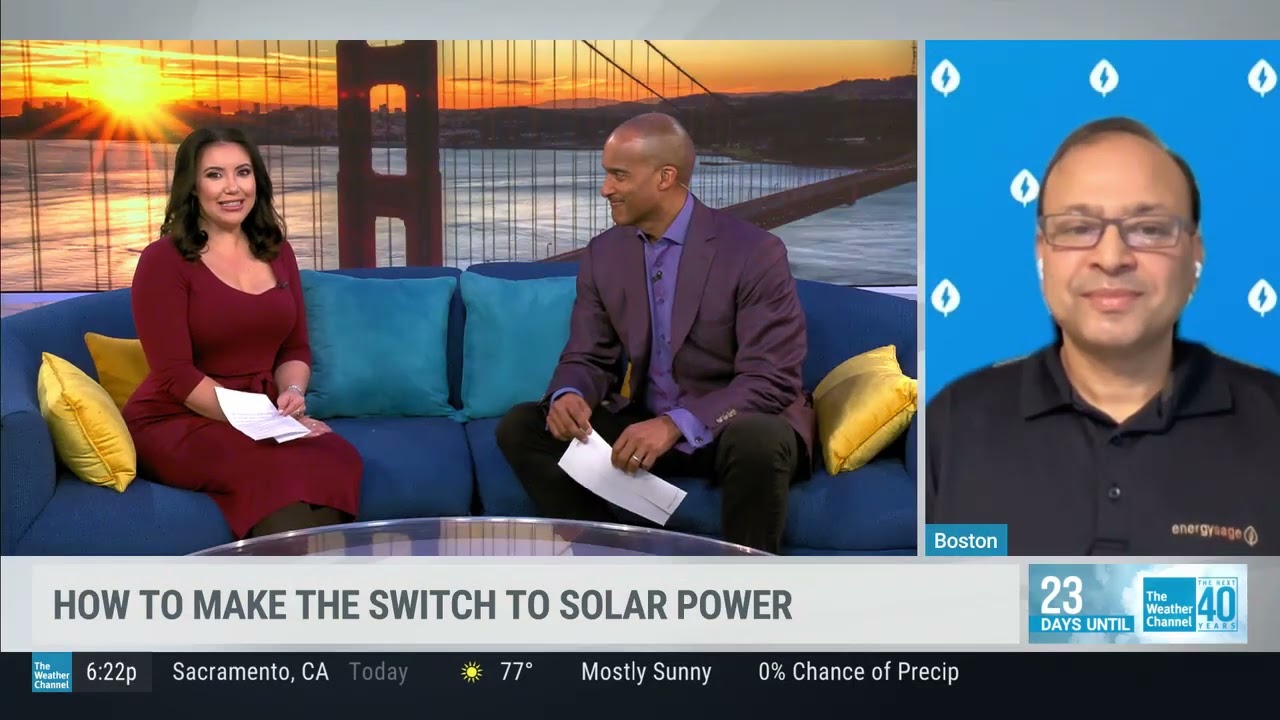 Q: What are the benefits of going solar?

A: There are three main benefits of solar:

People often think that it costs a lot of money to install solar, but there’s actually a huge saving in your electricity bills to consider. There is no doubt that solar is a big-ticket item. You can spend anywhere from $10,000 to $20,000 on the system, but guess what? It will save you a ton of money over the long term. There are also various ways to finance solar, which allows you to reduce your cost on a monthly basis right away.

Q: How should you decide if solar is right for you?

A: The first thing you should figure out is if there’s a place to install solar panels – either on your roof or in your backyard. You can start by just walking outside and taking a look at your roof. Do you have enough space – between 300 and 500 square feet of space on your roof that is not covered by trees? That’s number one. Then you can start getting quotes. [EnergySage note: Even if your roof or home isn’t a fit for solar, you may be able to save money on your electric bills through a community solar farm. Learn more about community solar farms here.]

Q: I just had my roof replaced last year because I had hail damage. How durable are these solar panels?

A: Solar panels are very durable. They’re covered with borosilicate glass, which is very, very hard to break.

Q: How do you get started with going solar?

A: The first step, and I think the easiest step, is to go to EnergySage and sign up. You’ll get anywhere from three to six quotes. The goal here is that because this is a big-ticket item, you want to comparison shop. You also want to make sure you’re buying the right quality equipment. And if you’re interested in batteries, you can also find information on those on our site. We make sure the installers we list are focused on quality. You can also request financing options to find the right option for you.

Q: Are there rebates or tax credits if you install solar on your home?

A: Absolutely. There is a 26% federal investment tax credit, which is available to everybody.

And in addition to that, there are often local incentives available from your local utility, city, or state. We can help you with that, too.

Q: Are solar panels effective when the daylight hours get shorter? And what about nighttime?

A: So the way the solar energy solar panel systems are designed is to cover your electricity needs throughout the year. So in the summer, yes, you will produce extra energy during the day.

Then, you are sending extra electricity that you’re not consuming back to the grid. Your meter is actually running backward and it may be powering your neighbor’s air conditioner. At night, the meter runs forward.

You actually get to take the electricity back from the grid, and that is why it’s called net metering. Increasingly, homeowners are adding a battery to their solar energy system so they can control their consumption and demand.

Firsthand experience from an EnergySage customer who went solar

Josh, an actual EnergySage customer and homeowner who switched to solar energy, also joined The Weather Channel to share his experience of going solar. You can watch his interview segment about making the switch to solar or about going solar. 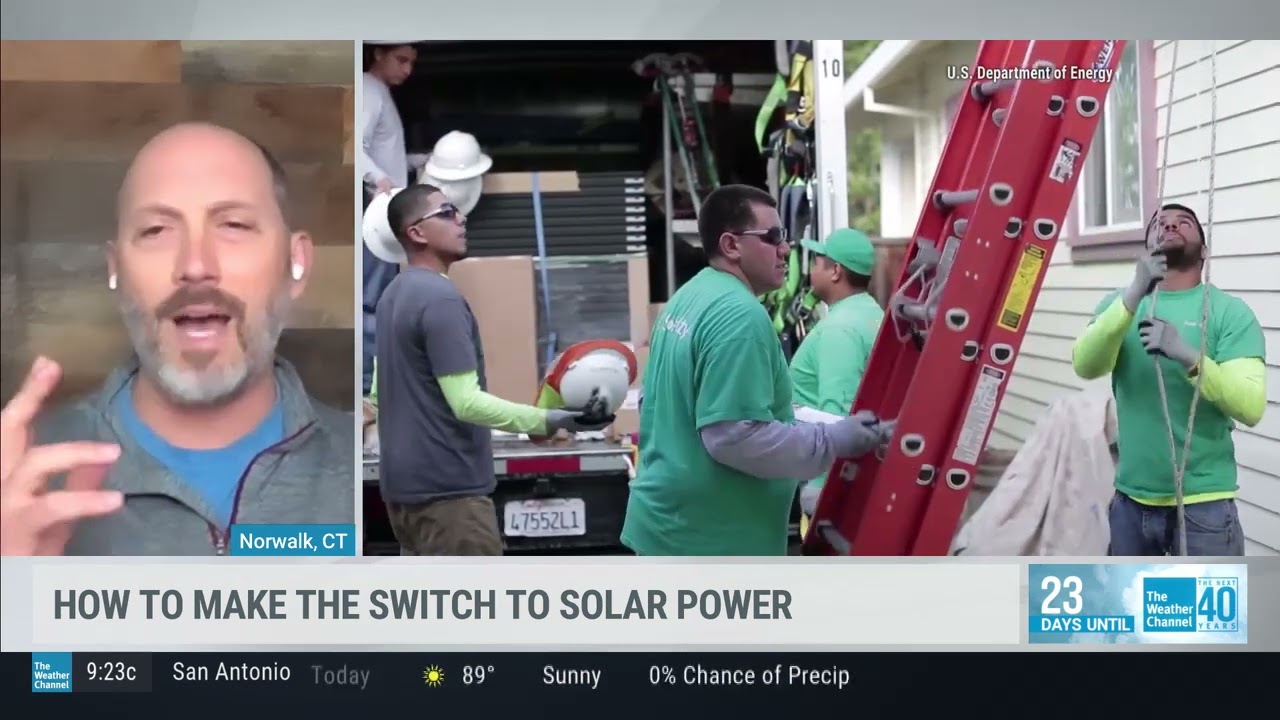 Here’s a summary of the questions and answers from Josh’s interview:

Q: What made you switch to solar?

A: There are three main reasons I switched to solar. They’re all very important to me:

Q: Some people are hesitant to go solar because of the initial cost. What would you say to people if that is the number one thing that’s holding them back?

A: I think it’s very important to get a lot of estimates and talk to a lot of installers. I talked to about five or six installers and went through all their quotes. I had some help with a consultant from EnergySage, who you’ve interviewed today already.

They were great and really broke down the numbers for me. I took my yearly electric output and figured out I was going to recoup about 75 to 80 percent of those costs. And that was a lot of money. So over 10 to 20 years, I expect to save tens if not hundreds of thousands of dollars in electricity costs. When you put it that way, the initial outlay was pretty good.

The other thing that softened the blow is that there are a lot of good tax savings, both at the state level, but also at the federal level. So I ended up spending about 65 cents on the dollar for the original cost.

Q: We have heard how important it is to make sure you have the right company installing your solar panels. Why is that so important?

A: I found that the most daunting part of the project was picking the right installer. That’s what gave me the most anxiety. So when you interview a lot and you dig down into the contracts with the help of a consultant like EnergySage who you interviewed earlier, they were great. You realize that there are a lot of differences: some are the most expensive, some are the least expensive, and most of them are right in the middle. And it just depends on what they’re giving you.

I went with an installer that I believed could get the job done and knew our local variances in zoning. Also, I have a difficult roof with a lot of nooks and crannies. So I needed someone who I knew would actually get the job done versus someone who’s better at maybe a cookie-cutter installation and can just slap up on a square roof. That wasn’t what I was looking for.

Q: Did you have to prune some trees or perhaps take some down to make sure you get maximum sun exposure?

There was one tree I had to take down. I wasn’t happy about it, but it needed to come down for other reasons, too. So it wasn’t that difficult. Also, the region you live in, by the way, is important. Some states have more expensive electricity than others. So you really have to know your own rates. There are some states where it doesn’t make sense to install solar. [EnergySage note: over the lifetime of your system, you will save in most states by going solar – your payback period to recoup your investment may just be longer depending on the available incentives.]

How to easily research and shop for solar

Curious if solar might be a good fit for you? In most cases, you’ll see a compelling return on investment to go solar, but your exact value depends on factors like your location, roof, and energy usage. Join the growing list of those going solar through the EnergySage Marketplace! Sign up for a free account to compare quotes from local installers so you can find a system that meets your needs at the right price.