< Solar News
In the age of clean energy and efficient building design, most if not all locations can benefit from solar energy, and holy buildings such as churches, mosques and synagogues are certainly one of them. In this article, we’ll explain why congregations of all faiths should consider installing on their community’s church.

Recently, EnergySage was engaged to guide the Sudbury United Methodist Church (SUMC), a Massachusetts church through the evaluation and installation of a solar photovoltaic system, also referred to as solar panels and solar power systems. While SUMC is financially sound, like most not-for-profit organizations, its resources are constrained. There is a continual need for capital, which often results in some projects being delayed or not approved because of funding. With all of these factors in mind, two church members suggested the board consider investing in a solar energy system to save money and also move towards a sustainable source of energy. Both had personal experience with solar systems. One of them, Diane Hammond, previously had worked with EnergySage on her own home’s solar installation and the second, Patrick Helsingius, is a church board member who had prior experience evaluating the same decision at another church. Intrigued by their suggestions, the board issued a soft mandate to begin the research process, assigning Patrick as the project manager to lead the effort. Initially, the church board did not have a clear understanding of the financial benefits of a solar PV system. They also did not consider the environmental benefits to be the driving force. Some thought that a pure “environmental” motivation could be a polarizing issue within the congregation due to varying opinions regarding climate change. “Doing the right thing for the environment may not necessarily be the primary driving force, but it’s consistent with the mission of the church– being good stewards of the earth,” says the project manager. “The solar system could be a powerful statement to the community of what the church stands for and what our values are.”

While Patrick sees himself as an objective information gatherer, to some extent he also has become the project’s “internal champion.” As both a computer scientist and electrical engineer, he was further along in understanding the basics than most. Still, he spent a considerable amount of time familiarizing himself with solar photovoltaic technology. His earliest efforts were focused on getting his arms around most of the industry jargon and the many details related to the underlying economics, including: He also knew that he would need to shepherd the rest of the church board through its own learning process. It would be important to make sure that the decision makers had all of the information needed to make an informed decision. Once the board had bought into the project, it would be presented to the rest of the congregation. There would be reviews by the town, the historical district commission, etc., so it was vital that the project manager have all of the information necessary to address the concerns of his various stakeholder audiences. It was feasible that even one person could derail the project, so in-depth due diligence was critical.

How EnergySage can offer research and assistance for churches, mosques and synagogues

He began by collecting details about the church’s energy consumption and costs as well as information about the orientation and structural integrity of the roof. He then engaged EnergySage to assist with the research and evaluation process and began the process of selecting an installer. Like many of us, he asked for referrals from friends. He also received suggestions from EnergySage. He found not all installers were eager for the church’s business for several reasons: With these factors in mind, Patrick and EnergySage contacted several installers to gauge their interest, schedule site visits, discuss potential financing options and eventually secured several project quotes. From the outset, Patrick assumed that there would be little or no capital available to install a solar system. He knew that the church could save money, but his knowledge about what might be required in terms of upfront investment and what the savings actually might be was not specific. His initial discussion with EnergySage and the vendors he contacted helped him to understand not only the potential for the church to obtain free energy without a capital outlay, but also the potential to generate additional cash flow. Based on these initial findings, the project was extremely appealing from a financial standpoint.

The church spends about $1,000 a month or $12,000 a year on electricity. While electricity costs have declined over last two years, they rose over 7% a year from 1990-2010. Depending on its size, a solar PV system not only could provide most or all of this electricity, but it also would provide the same environmental benefits as planting over 1,100 trees each year. Because the church would not qualify for most of the tax incentives available to a typical commercial property owner, purchasing the system outright was not an attractive option. The table below lists the details of some of the potential financing options that were presented to the church1. One of the challenges Patrick faced was evaluating the competing quotes and determining which provided the best financial returns and fewest risks. He had to “normalize” the quotes so that he would be able to compare them apples to apples. He consulted with EnergySage to evaluate potential contract terms, analyze the financials, including upfront investment, savings and annual cash flow, quality of proposed solar panels, and the experience, responsiveness, and credibility of each installer. Based on his analysis, he was able to shortlist suitable options for presentation to the board.

While the project was quite attractive financially, a green-light was not necessarily guaranteed. Patrick needed to address a multitude of concerns before the project could proceed. Like most not-for-profit boards, the church’s board tended to be fiscally conservative and would need to have a complete understanding of the level and source of the risk involved. Concerns included: As an integral part of this process, Patrick and other members of the board gathered the information necessary to address or mitigate these concerns. They consulted an accountant and a tax attorney about tax implications, had an installer bring in a structural engineer to verify the strength of the roof, and did some financial return calculations for the proposals. They were as transparent as possible with the rest of the board about the research they had conducted during the evaluation. A similar process was needed with the town’s historical commission. The commission’s primary concerns were with the appearance of the church. While they understood the benefits the panels would provide, they needed to weigh this against the potential visual impact on the historic district. To overcome this, Patrick, together with another member of the board, presented computer generated renderings of what the panels would look like along with pictures of similar installations. 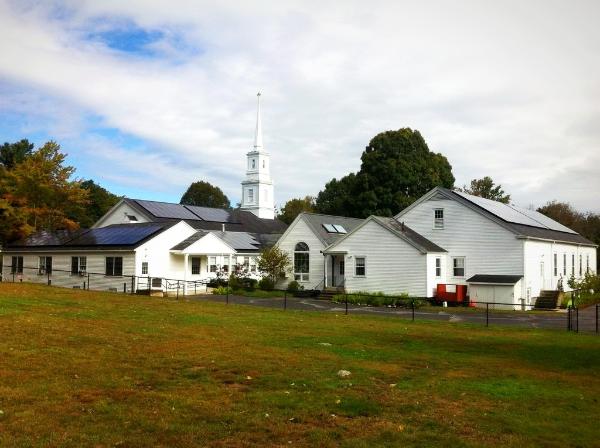 Today, the church is benefitting from the solar installation – thanks in part to EnergySage. To get across the finish line, they had to present the project to the congregation, review the multiple bids they received on the EnergySage Marketplace to make sure they matched expectations, and agree on the final system design layout. The installer also needed to perform final electrical system and structural integrity analysis. Looking back, Patrick thinks that it would have been extremely helpful if he had had an example to follow, someone else that had blazed the trail before him. While there wasn’t a trailblazer for him, he is happy that he can now serve in that role for others that follow. He recommends that anyone evaluating a similar project seek out objective sources of credible information. For him, the ability to get multiple solar installation quotes on EnergySage.com, in conjunction with their impartial information and counsel, helped him make it through the research and purchase process. This included understanding the technology and the market, securing and evaluating competing bids, understanding contract terms, and eventually selecting the best pricing option. Solar panel systems can be rewarding from both a financial and environmental standpoint – and will have broad appeal to most stakeholders and decision-makers. Despite their appeal, however, the process can be a long and complex one. Time and effort are needed to research and understand the technology and the underlying financials. The project lead needs to be committed to seeing it through to the end. Additionally, a strong directive from the organization’s governing body can go a long way toward securing the necessary buy-in from other stakeholders along the way. As Patrick looks back on the past several months, he says that he has enjoyed the process. On a personal note, he believes that this has been a good use of his time because it will benefit both the church and the environment. Moving forward, he’s looking forward to sharing the results with the EnergySage community as well as other religious institutions that could benefit from his experience and expertise. If you are a congregation member or leader of any faith interested in receiving and comparing multiple solar installation quotes for your church at no cost, simply sign up your mosque, synagogue, church or other religious location on the EnergySage Marketplace today (no phone calls required to sign up). Our dedicated team will help you consider all of your solar options and make the right decision for your congregation – just like we helped Patrick and Sudbury United Methodist Church!

1. To expedite town and historic district commission approvals, the church opted for a smaller system that supplies most, but not all of the power the church consumes.

11 thoughts on “Solar panels for churches: How congregations benefit from solar”