Many people are under the misconception that they can’t install solar panels on their roof for a variety of reasons, whether because of the material, their location, shade, or the dimensions of their roof. There are many factors that make a roof more or less suitable for solar, but while some roof qualities make a rooftop solar system installation difficult, others have a minimal impact on solar energy production.

In this article, we’ll review the two main roof factors that impact the performance of solar panels: direction and angle.

What’s in this article? 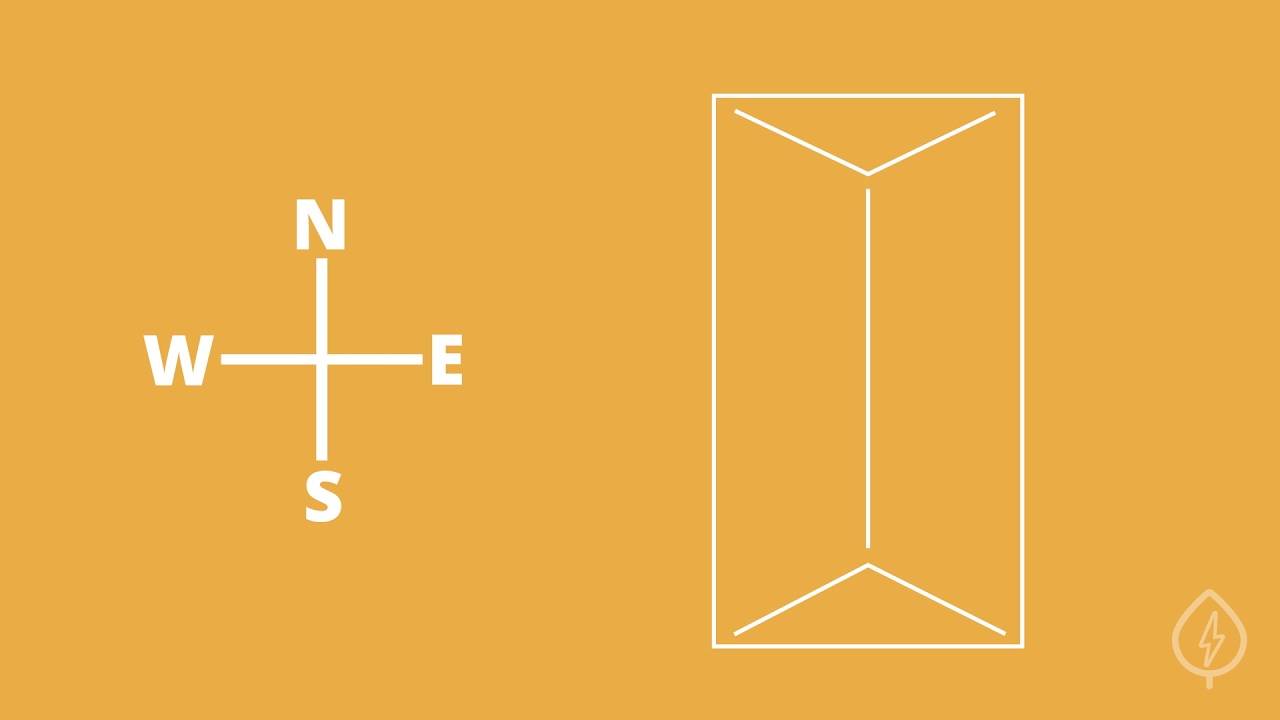 Generally, solar panels that face directly east or directly west produce about 20 percent less electricity than if they were facing south. This doesn’t mean you won’t save money, but if you’re aiming to cover all of your electricity usage with solar, you may have to install a few more panels than you would otherwise need with a southern-facing system.

If you live in the northern hemisphere, while it’s technically possible to install solar panels on the north side of your roof, it’s not the best location for solar production (in fact, it’s the worst) – you’ll likely need to use special mounting so that the panels oppose your roof’s slant in order to generate electricity. This means that they won’t sit flush with your roof, and will still produce relatively little electricity. If a northern-facing roof is your only option, it’s worth considering alternative installation options, such as ground-mounted solar or a carport installation.

There are a number of factors that will alter the optimal angle of your solar panels. Here are a few things to consider when determining the best tilt for your solar array:

Most solar arrays are installed at an angle that best optimizes sunlight exposure for that location. For the vast majority of U.S. property owners, the ideal angle for a solar panel installation is close or equal to the latitude of your home (on a south-facing roof), somewhere between 30 degrees and 45 degrees. By tilting your solar panels the same angle as the latitude of your home (which means pointing your panels at that average position), you are ensuring that you will get the maximum average output from your solar power system throughout the year.

To give you an example, we compared data from two places (New York and Washington, D.C.) and estimated the production levels of solar panels tilted at various angles. What we found was consistent with our investigations into the effects of other variables:

t would be great if everyone had a roof that was angled exactly the same as their latitude, but every property is unique and there is no universal solar panel placement map. Many roofs are going to have slopes between 30 and 40 degrees, which means that solar panels can lie flush against the roof and produce enough electricity for attractive returns.

If you are trying to install solar panels on a steep roof, it may not be possible to place panels at the optimal tilt with traditional racking systems. Because the steep angle of your roof might already be higher than the optimal angle for production, the best you can do is lie your panels flat against the roof. Low-angle roofs will also face obstacles when it comes to solar panel installation and may require specialized racking if you’re looking to tilt them at the optimal angle. Placing panels flush against these types of roofs will mean less electricity production, which will lead to reduced solar savings over time.

In the case of a flat roof, solar installers will usually opt to use racking systems that mount your panels up at an optimal angle. While this allows for your panels to face the sun more directly, you may be limited when it comes to your system size. Tilting panels up on a flat roof will lead to the panels shading one another unless you space and stagger the rows of panels out on the roof. As a result, you can’t install as many panels as you would otherwise be able to if the solar panels were flush against the surface.

Regardless of whether your roof is steep or flat, it’s always best to have a professional solar installer mount the panels on your roof to ensure optimal production and optimal safety. And, if you’re not sure how solar panels could work for your home and roof type, be sure to check out this article to find out if you’re a good fit for solar.

Community solar allows you to tap into renewable energy resources and save money on your electricity bills without installing any equipment on your property. Check out our Community Solar Marketplace to learn more.

Solar panels work well in the winter, but you will typically see a dip in total energy production during particularly bad winters due to snow covering your panels and reducing their power output. During the winter in the northern hemisphere, the sun is low in relation to the horizon, so one way to counteract winter production dips is to install your panels at a steeper angle than your latitude—somewhere around 60 degrees is optimal. By doing this, you are setting up your panels to perform more efficiently in the winter because they will more directly face the sun as it shines from a lower point in the sky. Plus, installing panels at lower angles can also backfire because snow won’t easily slide off of your array. This will lead to long-lasting snow cover and decreased electricity production.

Another way to decrease seasonal variation in production is to adjust the angle of your solar panels twice a year in the spring and fall. In fact, a system at a 40-degree latitude can see a significant energy boost of about 4 percent. If you’re wondering what the best dates to adjust your solar panel tilt are, we recommend adjusting to the winter angle around September 15th and then adjusting them to the spring and summer angles around March 15th.

What about solar trackers?

The sun’s position is constantly moving throughout the year, and the only way to always have your solar panels angled perfectly is to install a solar tracking system. Solar trackers follow the sun as it moves slightly, which will bump up your energy production. If you are considering a ground-mounted solar system a solar tracking setup may be what you need to optimize your installation.

For the majority of solar shoppers, a rooftop system is the lowest cost and doesn’t take up space on the ground. Solar trackers can’t easily be installed on a rooftop solar system, so they’re generally only used in commercial solar projects – they can dramatically increase production because the tracking system acts as a solar panel angle calculator.

It’s not a good idea to install your panels to face a suboptimal direction even if it means the best tilt possible. For example, in Boston, a solar array at 30 degrees south is still going to produce more electricity than an array tilted at 42 degrees and facing north.

Common questions about the best angle for solar panels

There are many factors at play when it comes to calculating your solar panel angle, leaving some homeowners a bit confused about what their next steps should be. Check out a few of the most frequently asked questions about optimal solar panel angles and orientation for additional insight.

How do you determine the best angle for solar panels?

Calculating the best angle for your solar panels will vary slightly depending on where you live. But, the rule of thumb is that they should be angled to face as close to the sun as possible. As such, the ideal angle for most people is close or equal to the latitude of your home – typically somewhere between 30 degrees and 45 degrees.

What is the best direction for solar panels?

The best direction for solar panels is south. This is because the sun is always in the southern half of the sky in the northern hemisphere, and facing south means the most direct sunlight exposure. It’s important to note that it’s not recommended to install your panels to face a suboptimal direction just to get the best tilt possible.

Is it worth tilting your solar panels?

Yes, it is worth tilting your solar panels so that they can collect energy more efficiently. By tilting them, preferably close to the same angle as the latitude of your home, you’ll be able to get the maximum average output from your solar power system year-round.

Neither east nor west is perfect for solar panel orientation, but in both cases, panels can still capture sunlight and generate energy – and savings!

Do solar panels need to be south facing?

Solar panels don’t need to be south facing but you will get the most output from a south facing system. It’s better for solar panels to face south in the northern hemisphere rather than east or west. North-facing rooftops are the least optimal location for panels.

Determining the ideal solar panel angle for your property is straightforward, but you’ll need a certified professional to recommend equipment and install your solar system. On the EnergySage Marketplace, you can receive free quotes for a solar installation from our qualified, pre-vetted installers across the country who will design and optimize a solar energy system for your unique property. If you are interested in talking to potential installers about the angle of your solar panels, simply leave a note on your profile indicating your interest.

Expert guide to solar panels for homes
Solar shingles: what you need to know
What are the most efficient solar panels?
Are solar panels worth it in 2022?
Solar farms: what are they and how do they work?

14 thoughts on “What’s the best direction and angle for my solar panels?”