The solar industry has evolved significantly since we first opened the EnergySage Marketplace: in 2012, there were fewer than 300,000 homes with solar in the US; in 2021, that number climbed above 3 million American homes with solar!

As the industry has grown and grown (and grown), we’ve traced solar’s progress through the data included in quotes in the EnergySage Marketplace, from the declining cost of solar to increasing system sizes, and from the evolution of solar equipment to trends in popular equipment included in quotes. In fact, EnergySage is the only source of quote-level solar and storage data. In this article, we’ve collected some of the best data from our Marketplace and from other industry sources. See something you’re interested in or curious about using EnergySage data? Feel free to reach out to our data team directly.

The cost of solar is typically reported in dollars per Watt ($/W), which is the industry’s equivalent to comparing real estate in dollars per square foot: it’s a metric that allows you to compare across solar quotes of different system sizes. There are three main sources of solar pricing information available:

The cost per Watt displayed in EnergySage quote data is generally 20-25% lower than reported installed prices as reported by Tracking the Sun due to both the competitive nature of the EnergySage Marketplace (which gets you lower prices on solar!) and given the time delay between price quotes for projects and reported installations. 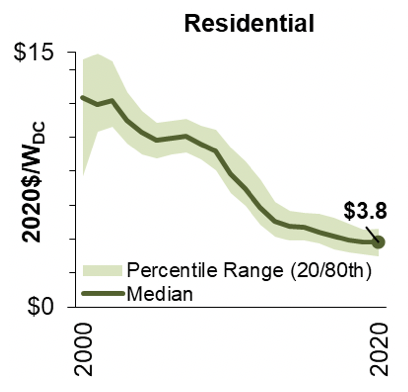 The annual Tracking the Sun report published by Lawrence Berkeley National Laboratory (LBNL) is the most comprehensive review of solar data made publicly available in the industry. The report includes analysis of nearly half of the customer-sited solar panel projects installed all-time in the US, and even comes with the supporting data in a couple of massive excel sheets free to download. In the most recent Tracking the Sun report, LBNL found the median installed cost of residential solar systems in the US was $3.8 per Watt.

Solar panels are getting more efficient and more powerful

As solar costs have decreased, solar technology has improved markedly. In the early 2000s, the typical solar panel installed on homes in the US was capable of producing slightly more than 200 Watts of power and had an average efficiency of around 13%. Today, the most frequently quoted solar panel on EnergySage is capable of producing 360 Watts and the average efficiency of solar panels installed in the US is quickly approaching 20%. These technological advancements mean that solar panels now provide more power per square foot of your roof at a lower cost.

More efficient solar panels means that homeowners can fit more power onto their rooftops. For example, a typical solar installation will use around 500 square feet of surface area, which can fit 26 or 27 standard 60-cell solar panels. The difference between installing 26 of the 250 Watt solar panels that were standard in the early 2000s and 26 of the 370 Watt solar panels that are standard today is significant: that alone would increase system sizes from 6.5 kilowatts (kW) to 9.6 kW, all while installing the same number of panels on the same size of roof.

As a result, solar panel system sizes have increased for residential systems in the US over the last decade: on EnergySage, the average quoted system size increased from under 8 kW in 2015 to over 10 kW in 2021, while nationally, the median installation has grown from under 3 kW in 2000 to 6.5 kW in 2020.

Every year, The Solar Foundation (now a part of the Interstate Renewable Energy Council) publishes the annual Solar Jobs Census, a comprehensive review of the industry’s workforce. As the number of solar installations has increased throughout the country, so too have the number of jobs supported by the industry. These days, solar supports just shy of a quarter million jobs–including all of us at EnergySage! (We’re hiring by the way.) For a point of comparison, there are about six times more solar jobs than coal mining jobs in the US, according to the Bureau of Labor Statistics.

High quality solar equipment is the most popular on EnergySage

In 2020, EnergySage began tracking the price of energy storage when included in quotes on the EnergySage Marketplace. Similarly to tracking $/W for solar panel systems, the best metric to use to compare the cost of storage systems is dollar per kilowatt-hour (kWh) stored, or $/kWh. On EnergySage, we see a median $/kWh stored in the $1,100-$1,400/kWh range, inclusive of installed costs, and is incremental to the cost of a solar panel system on its own. This pricing varies by state, brand, and even among battery chemistry types.

While storage pricing reports are still new in the industry as a whole, two good sources are California’s Self Generation Incentive Program (SGIP) data and LBNL’s recent behind-the-meter storage trends report. Both of these sources provide additional data points for the storage pricing trends seen on EnergySage: SGIP applications in 2021 included a median cost of storage of $1,061/kWh, below the costs observed on EnergySage, while LBNL reports that adding storage can increase the cost of a solar installation by a third.

Start shopping for solar on EnergySage

Looking to install a solar or solar-plus-storage system? Over 10 million people come to EnergySage each year to learn about, shop for, and invest in solar. Sign up for a free account on the EnergySage Marketplace today! You’ll receive custom quotes from our network of pre-vetted solar installers. By comparing quotes, you’ll be able to find a system that fits your needs at the right price.