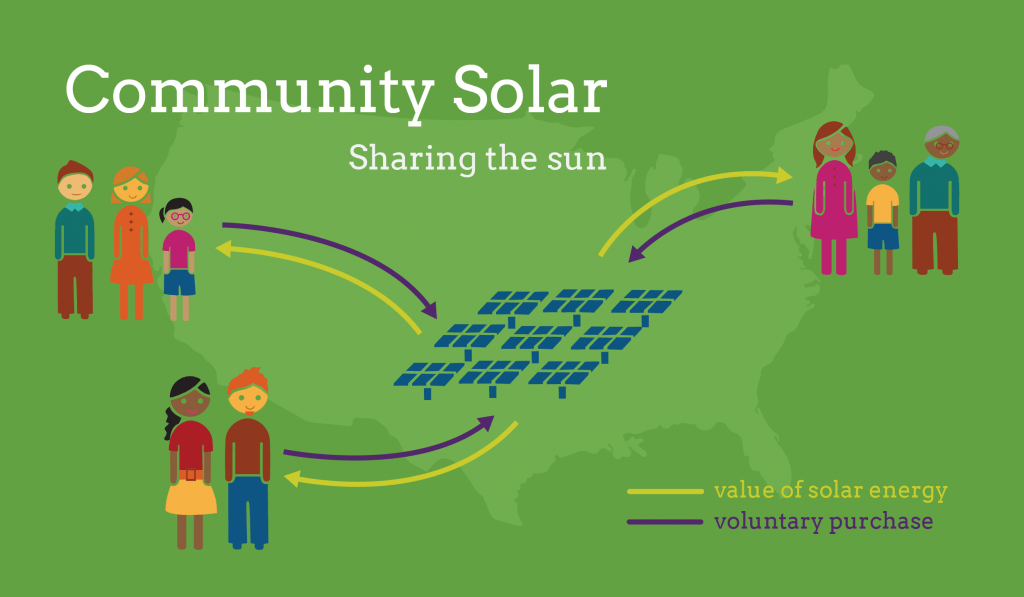 With strong government incentives and falling equipment costs, going solar has never made more financial sense on such a broad scale. Testament to this is the tremendous increase of the number of American homes & businesses with solar panels on their roofs in recent years. But at the same time, not everyone has a roof of their own, and even those who do might have one that is shaded or otherwise unsuitable for solar. Community-owned solar projects – sometimes called community solar gardens, or shared solar farms – promise a way for the roofless and ‘roof-impaired’ to go solar.

In a nutshell, community-owned solar gardens & farms let their participants partake in the financial and environmental benefits of solar power even without a roof. If you are a participant in a community solar project, you should expect to save money on your power bill. Exactly how these savings are delivered will vary by location and program, but as with rooftop solar, it is key that anyone considering buying electricity from a community solar garden shop around and be well-informed before making a decision.

Many States in the U.S. Advocate For Community Solar Gardens

More and more community solar gardens are appearing in more and more states as policies come into place to support them. Currently, 9 states and Washington DC have all enacted policies governing and supporting shared solar projects, according to advocacy group www.SharedRenewables.org. In at least 10 other states (or parts of states) there are campaigns underway to have shared renewable project legislation brought in. As part of its SunShot initiative, the US Department of Energy (DOE) has also been looking to boost community solar for some years now, updating its definitive 2010 report on the topic, A Guide to Community Solar, in 2012. Further clearing the path, the National Renewable Energy Laboratory (NREL) recently introduced a Community Solar Scenario Tool (CSST) to help communities and developers alike assess the financial viability of potential community projects.

At the moment, the number of programs available is still small but growing, especially in states with community solar policies. If you live in one of the states below, you can either keep an eye out for community solar projects developed by others – or even consider starting one of your own.

The birthplace of community solar advocates the Solar Gardens Institute and the rapidly expanding community solar project developer Clean Energy Collective, Colorado is home to more community solar farms than any other state, with at least 19 in operation at the time of writing. State policy makes it relatively easy for projects to be developed and for benefits to be paid out through utilities. It also encourages participants to be owners in projects, and as such, most Colorado programs are ownership-based.

California has long been the national leader in rooftop solar power. More recently, the state has also enacted two key pieces of legislation to help along community solar. One is a Virtual Net Metering program for multi-tenant buildings (whose allotted funding has run out until 2015), and the other is ‘Senate Bill 43’ (SB 43). SB 43, while not a community solar-support policy per-se, is expected to foster broad uptake of renewable energy by allowing utility customers a cheaper ‘green option’ on their power bills.

Minnesota is home to what is possibly the USA’s most progressive solar valuation policy: the Value of Solar Tariff (VOST), which pays solar system owners a rate that reflects what their solar power is worth in absolute terms. By contrasts, under Net Metering policies in most states, the rate paid for solar is tied to what they pay for solar from their utility. The state’s largest utility, Xcel energy, is required under state policy to administer community solar projects developed in its network, and must pay the VOST rate to community solar project participants as they would rooftop solar customers. Other investor-owned utilities are not required to administer projects, but still pay the VOST rate.

Instead of Virtual Net Metering, Vermont’s approach to community solar is referred to as ‘Group Net Metering‘. Group Net Metering takes the ‘community’ aspect of community solar one step further than most other states, allowing any person in charge/owner of a renewable energy facility to determine how the renewable energy credits it produces are allotted, avoiding the need to have a utility administer the program or its payouts. Additionally, all Net Metering credits created through a solar system in the state (rooftop, community or otherwise) benefit from a ‘solar adder’ which increases their value above whatever their utility rate is.

Community solar legislation for Maine is incorporated in the state’s Net Metering (‘Net Energy Billing‘) legislation; project participants must have a legally enforceable ownership stake in the projects that they receive benefits from, and at least 51% of owners need to be local. A project may have up to 10 owners and its electricity split between up to 10 meters. The state is currently piloting a program to incentivize energy generation from community projects.

Other states to watch for community solar

Curious about the state of community solar in your state? The map below provides a rough overview of which states have policies supporting community solar and where projects have sprung up even without explicit state support.

(Got feedback or questions about the map? Email hello@energysage.com.) 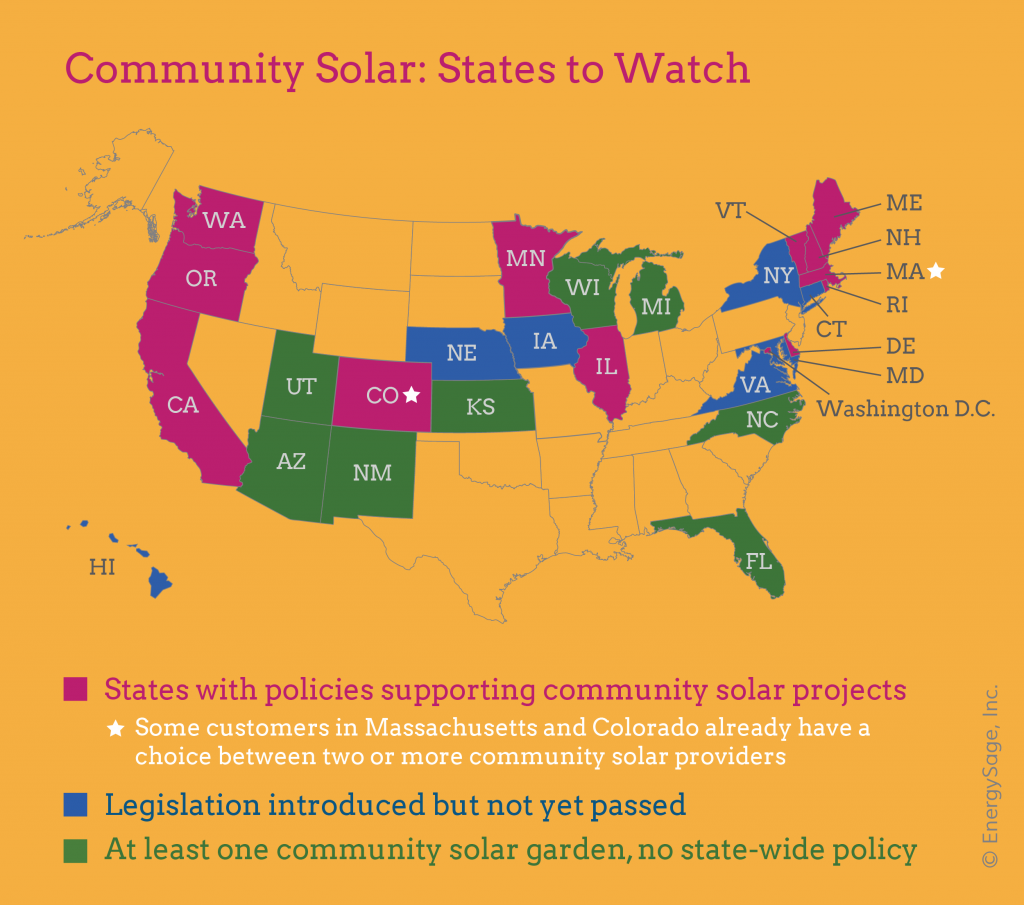 One thought on “Sharing the sun: Community solar gardens taking off around US”